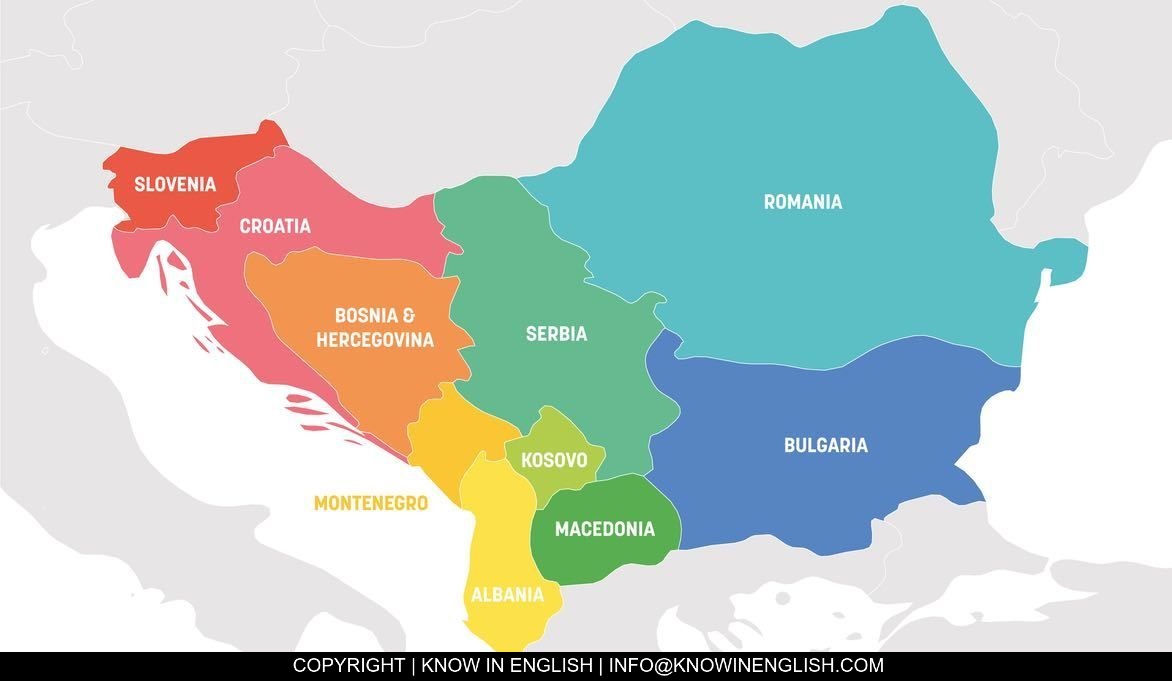 The Balkans attract large numbers of tourists, as tourism in many Balkan countries is an essential source for the growth and renaissance of the national economy, due to the diversity and beauty, it contains in the various tourism resources. Balkan countries include cultures, races, and various religions, due to the succession of many civilizations over them during their long history.

Balkan countries stretching 468.787 km area2 almost as located within this area 6 countries completely, these countries are Albania, Bulgaria, Bosnia, and Herzegovina, Kosovo, Macedonia, Montenegro, and 3 countries mostly, namely: Croatia, Serbia, Greece, And 4 countries in part only, which are: Romania, Slovenia, Italy, and Turkey, and it is worth noting that it is difficult to define the Balkan countries for many geographical and political reasons, as these countries were the subject of great controversy among scholars, so a difference appeared about the number of countries that belong to the region, except The following ten countries were accepted.

Occupies Albania an area of 28.748 km2, and is one of the largest coastal States, with views of the Adriatic Sea, and in addition to that, they are characterized by the presence of many water sources where, as the rivers flowing from the high mountains, down to the Adriatic Sea And among these rivers: Drin River, and the River Vlore (in Albanian: Vlore), in addition to the presence of various lakes in it, such as Shkodra Lake (in Albanian: Shkodra) overlooking Montenegro, and Lake Ohrid, And Prespa, which share a border with Macedonia.

Albania is also characterized by the presence of many plains and swamps, in addition to the many hills and mountains, and the most famous of these mountains: the Albanian Alps, the Pindus mountain range and the Korab Mountains that includes the highest summit In Albania, which has a height of approximately 2,764m and extends until the state border road with Macedonia is reached, and the mountains occupy an area of ​​approximately 70% of the country’s land, and the population of Albania according to the statistics for 2019 is approximately 2,879,395 people.

It occupies the State of Bosnia and Herzegovina ranked No. 129 among the world in terms of area geography, with an area of approximately 51.197 km 2, and is distributed over the 3,291,128 inhabitants of space, according to statistics in 2019 AD, giving it ranked No. 113 in the ranking of countries in the world, according to the population, and a population density accounted for 68 people/km2.

Bosnia and Herzegovina are characterized by being land-locked on all sides, with the exception of its participation with the Adriatic Sea with a short coast, so it is a landlocked country, and it shares its land borders with: Serbia, Croatia, and Montenegro, as well as its mountainous nature, in addition to the vast coastal areas, It extends to the northeastern side of the country.

It includes Bulgaria 28 provinces, covering these provinces approximate area of 110.910 km2, with a population of 7,000,119 people, according to the statistics of 2019 m, involving Bulgaria in the land borders, and freely with several countries, as it is bordered by Turkey, Romania, Greece, The Republic of Macedonia, Serbia, and Montenegro, as it overlooks the Black Sea on the eastern side of it.

Montenegro belongs to the Balkan countries, and the name of this name is due to the beauty and charm of the natural treasures in it, as some call it the Pearl of the Mediterranean. as a result of its location on the Mediterranean, giving it a strategic location because it relates to the surrounding sea countries, the European and major centers, and occupies Montenegro geographical area is estimated at 13.812 km2, with a population of 628.026 people, according to the statistics of the year 2019 AD, as characterized by the diversity of races were, and being a State Young boys.

The country of Romania is located in the center of the European continent, specifically in the northern side of the Balkan Peninsula, and away from the south of the continent only 1,000 km, as well as from the Atlantic Ocean, North Cape, and the Ural Mountains 2,800 km, and covers an area of territory approximately 238.391 km2, as this area is inhabited 19,364,557 people, according to the statistics of 2019 m, Romania is the place that does justice to the road between the equator and the Arctic and features a temperate climate, and as a result For its astronomical location, it is located at a latitude of 45 ° N, longitude 25 ° E, and for this State number of major natural features that distinguish them, the Danube river, and the Carpathian Mountains, the Black Sea.

The State of Slovenia is located in Central Europe, and shares its borders with Austria, Italy, Hungary, and Croatia, and extends along the Alps, the Dinaric Alps, and the Pannonian Plains, until you reach the Mediterranean.

Slovenia occupies an estimated 20.273 km small area2, and though it features a picturesque and unique Btabieitha, as forests constitute approximately 60% of the total area, making Slovenia occupies third place in the largest list of European countries that contain forests, so After Finland and Sweden, in addition, Slovenia contains remnants of primeval forests, the largest of which are found in the Kocevje region. The country also contains hundreds of important therapeutic mineral springs, in addition to approximately 7,500 freshwaters. And rivers and streams extend over 26,000 km, um The country’s coastline is only 46.6 km long, and the population of Slovenia is 2,078,792 people, according to the statistics for 2019.

Located Serbia in the center of the Balkan Peninsula, and characterized by its climate continental moderate with four seasons, with an area of 88.361 km2, as it occupies arable land approximately 55% of this area, while forests cover 27% of them, and includes Serbia is the southern side of the Pannonian Plains, and the waters descend from its various rivers heading towards the Black Sea, the Adriatic Sea, and the Aegean Sea, as the northern part of it is characterized by the abundance of plains, while the central and southern parts contain large areas of hills and mountains, as the mountain peaks reach An altitude of more than 2,000 m, the mountains are in Serbia A large petroleum diversity, and has a population of 8,755,199 people, according to the statistics of 2019 m.

The State of Kosovo state the smallest among the Balkan states, as it occupies an approximate area of an area of the State of Jamaica or the State of Lebanon, and of this 10.905 km area2, with a population of approximately 1,907,592 people, according to statistics in 2018, and is the Kosovo name a name Serbia ‘s name, It means the land of blackbird, and Kosovo shares land borders only with several countries, as it is bordered by Albania on the western side, and Serbia on the north and east sides, while on the south side it is bordered by Northern Macedonia, as Montenegro borders it on the northwestern side, and Kosovo was the center of the Serbian Empire In the Middle Ages after the dug For the Ottomans to it in the period between the mid-fifteenth century and the early twentieth century, the number of speakers in the Albanian language.

Macedonia embraces 1,100 different sources of large bodies of water, despite being a landlocked country, and the most important lakes there are: Lake Doiran (Lake: Doiran), Lake Prespa, and also contains the oldest lake in the world, and the deepest lake in The Balkans, which is Lake Ohrid, has a depth of 284.9 m. In addition, many rivers pass through the lands of Macedonia, such as Crna River, Bregalnica River, and Vardar River (Albanian: Vardar), which is one of the major rivers that cross the state.

The Macedonian lands take the form of a high plateau, the nature of which is characterized by a variety of terrain, in which deep valleys and hills are spread, as are the mountains around it from all sides, and from these mountains: the Dinaric Alps, and the Kaurab mountain range that includes the highest peak in Macedonia, as it reaches a height 2,764 m, and Macedonia occupies a geographical area of 25.333 km 2, and inhabited lands around 2,083,418 people, according to the statistics of 2019 m.